I’ve got a Respeaker Core V2 to experiment rhasspy with my domotic environment.
I’ve intalled de the right OS and use the docker image for rhasspy.

It failled with snowboy complaining that de umdl file is not of the right type.

I’ve also notice that I have differences between the parameters in the web interface and those in the profile json file.

I’ve no more that. I’ve just clear all and redo installation by explicitly loading docker image for platform linux/arm/v7

No more error but I’ve no sound that comes to rhasspy from respeaker. The tests from the respeaker command line are goods.

I thought about getting the Respeaker Core v2. Does that work for you with rhasspy? Or should I rather use the 4 mic for the Raspberry.

If you want similar performance with a Raspberry when it comes to microphones I would recommend the Respeaker usb array v2 and not the 4mic hat.
If you want to use one of the respeaker pi hat arrays i would buy the 2mic as the 4 mic doesn’t give that much better performance but doesnt have a speaker output or a button.

I would not recommend the Respeaker usb array as for price its just not worth it, but just to put some context I really wouldn’t get a 4 mic pi hat as its a whole load of pointless.

Respeaker core is a Rockchip RK3229 which from memory is sort of in between a Pi Zero & Pi 3 if you had to give a rough approximation.
A bit weak generally with a soc much less supported so for me I would give that a miss.

The array and dsp audio chips it has are basically what the Respeaker usb is and prob much better on top of a Pi3 or 4.

I actually already use the mic 4 with a raspberry. I think the 4 Mic is good, but I come from Amazon Alexa and know it much better. I find the 4 mic weak especially at distance. 3 meters are specified here. With the Core v2 up to 5 meters are specified. I need one for the living room now. I would spend more money on that. I also thought of the stand alone and not the usb variant. I don’t need a raspberry anymore.

Well you just gonna have a easier time setting up Rhasspy and audio on a pi with the usb v2 array as the pi is just better supported than other single board computer platforms both software wise as well as when it comes to people helping you with problems.
I never warmed up to the performance of the 4 mic and it never worked better for me than the 2mic for half the price with more features.
The usb v2 array will definitely give you improved far field over any of the pi hats.
The price tag as @rolyan_trauts says is a bit steep but I’d take it in combination with a pi over the respeaker core any day.

Its my usual but all arrays without beamforming algs are essentially a whole load of pointless over a single mic.
It would of been better if the mics where all together in a huddle but they are made to look like DSP ones and are widely spaced so end up creating strange filters if you sum them together and actually can be worse than just using one.

Not having audio out on the same board means AEC algs with have will also not work due to clock drift.
Has a really nice pixel ring but as said the bit its for as a mic is really just a whole load of pointless and yeah it will not do far field that well but likely work better with a single channel of 1 mic if summing.

The RK3229 is an A7 and can not give you exact perf details but its a squeeze to get everything running on it depending what rhasspy modules you select. As it is less than a Pi3.

The 4 mic usb is still a board and does contain all the algs to help with far field.

I don’t think I know of a hat with the advanced beamforming, aec and stuff that isn’t usb.

But other than that any board even single mics are all much the same then the jump to the DSP beamformers and there really is no in between.

If you like your 4 mic then maybe we might be able to help you with settings and ALC but your not going to find much improvement with any other.
I sold mine on ebay and if you want a 4 mic linear you can have it for postage but that will be just the same (as still have that one some where)

Did it again and forgot about Matrix voice. 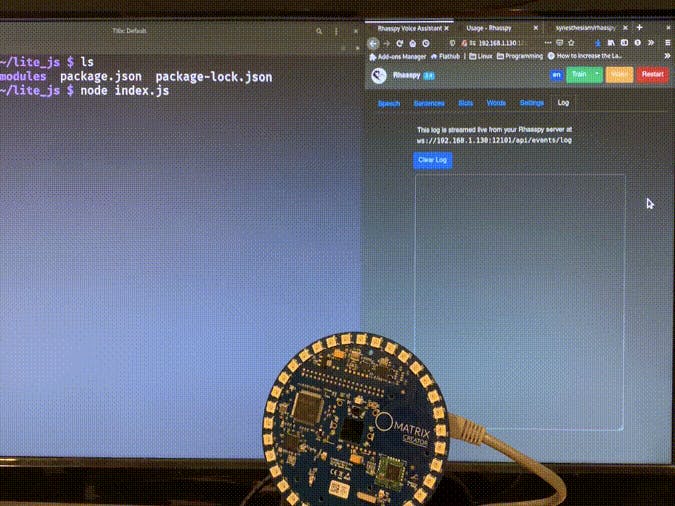 Learn how to install the Rhasspy offline voice assistant, through a simple Docker image! By Carlos Chacin, Samreen Islam, and Alfred Gonzalez.