Hi there. I’ve only used Rhasspy with Desktop, so I don’t know if it can vary much from console. Do you have a user guide for beginners? That is, how do I configure everything from the console?

Another question, what if I configure it from Desktop (the visual interface from the web) and then pass the code to OS Lite?

To be honest, I didn’t get your question.

After installation (from commandline or via docker) Rhassy can be configured completely via Web interface (using the browser of your choice on any remote machine in the same network), so there’s no need for any GUI on the server side.

first of all, I don’t think you understand how consoles pi os work. basically, a console is the base system everything runs on, and the desktop you see is just something installed on top of it to make using it easier. even with a desktop system you have access to the underlying console, by either switching everything you see to the underlying console, or, far easier, by opening something called a console, or terminal, or xterm, or quite a few other different names for it that gives you access to the command line interface.

pi os lite is just the pi os that does not have the desktop installed, it is intended for headless servers that simply don’t need a desktop or ppl that are very particular about installing everything, including their desktop, for themselves. there are also two versions of the desktop package, one with minimal software preinstalled, and one that comes with pretty much everything needed for normal use.

the next thing is, that there is no need at all to use pi os lite with rhasspy, because of what I explained earlier, the only difference would be there not running a desktop that might hog a few resources, but that is pretty minimal and not a concern in most cases.

this it why your question is confusing. if you have a rhasspy installed on your desktop, you should have used a console to install it, and once it is running, pretty much everything will be done via the web interface. the only reason I ever need to access my rhasspy via console is if it crashed so far that the web interface is not responding anymore, or if I need to shut it down instead of restarting, which I only ever do to test some completely unrelated stuff on the server. only thing that needs console usage under normal circumstances is updates, and how that is done depends on how you install it in the first place.

there is also no code passing involved in using the web interface. if you have rhasspy running on one pc, regardless of desktop or not, everything can be done from there. the only thing i can think of for you to ask this question is if you access it via localhost (or 127.0.0.1) in your browser. if that is the case, then you can just figure out the local ip address of the pc running it and use that in any browser on any pc that is connected to the same network (via cable of wifi). if me talking about ip addresses and networks confuses you, I would suggest investing an hour or two reading up on the topic of local networks and ips, because that is something universal and not something rhasspy related, so this forum would not be the best place to learn about it.

also, since you mentioned passing code around, I don’t think anyone that is not doing active development on rhasspy has ever any need to pass actual code around. what you can pass around is the configuration, which you can find in in some subfolder of .config on the pc running rhasspy, this folder might not be visible in the gui and standard terminal commands because it is hidden, but there are ways to show hidden files in all file managers I came across so far and plenty of guides on the internet on how to do it. in there you will find a folder named rhasspy or so, and in there is a folder called profiles in which all the actual configuration is saved. so if your question was about moving from the rhasspy install on your desktop to pi os lite, then this folder can be copied over after you installed rhasspy, but I would only recommend doing that if you did some kind of non-default config that you don’t want to repeat, it is normally better to start from scratch on a different install.

the last way I can think of on how to interpret your question is that you want to know how to actually access a pi os lite without using the desktop, in which case I point you to the huge amount of guides on the internet on how to use an ssh connection from a different pc (this comes back to the ip addresses from earlier) or you will have to just use the console directly on that pi, with a keyboard and a monitor attached.

I started to answer you before, but like Daenara, I got more confused as I tried to understand where you are at.

By “desktop” do you mean the graphical environment with all the apps in pop-up windows ? Or the web browser app that you are reading this in ?

The following screenshot shows part of the graphical GUI “Desktop” provided by the Ubuntu flavour of linux which I happen to be running on my main PC. You may be using Microsoft’s Windows, which will look somewhat different, but is based on the same principles. 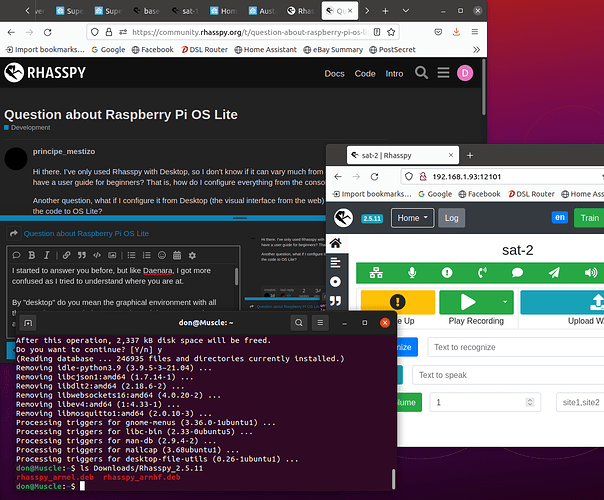 Note the web browser app window open in top left of the image, containing multiple tabs showing different websites, and currently showing this website and this topic.
Toward the bottom left is a window of the “Terminal” app (though as daenara said there are many names for the same thing); which just opens the command line in a window on your “desktop”.
And to the right is a another browser window (in this case the Firefox app) displaying my Rhasspy satellite-2’s configuration.
One desktop, 3 windows, including the Rhasspy web interface.

The Rhasspy documentation (and all the instructions I have seen) for installing Rhasspy require that you enter commands, which you probably did in a terminal app. In my experience there wasn’t anything to do on the Raspberry Pi which used the graphical desktop.

Raspberry Pi OS Lite does not install the GUI desktop, instead taking users directly to the command line. This is particularly appropriate for machines which (once set up) are intended to run “headless” without a screen and keyboard.

Most Rhasspy configuration is done through its web interface, which should be run on your main PC anyway.