I can’t get the rhasspy-cli to work. I’ve downloaed the bash script from https://github.com/synesthesiam/rhasspy/blob/master/bin/rhasspy-cli, but when I execute it, it returns:

Is it because my Rhasspy installation is under Docker? If so, how do I get the rhasspy-cli to work with that?

I haven’t worked out rhasspy for myself yet, but yes, this is because of docker.
You can start docker with an interactive shell with docker run -it ... and then download and use rhasspy-client there, I guess

Thanks lightfire0, your comments helped me think things through a bit.

The rhasspy-cli shell script actually is a call to Docker. I’m wondering whether in fact it’s a leftover from an earlier version of Rhasspy. I’m not sure where I originally found a reference to it, but when I look at the tutorials page now, I can’t find it. However, there’s an entry for rhasspy-client, which seems to have similar functionality, and meets my immediate requirements, so I’m going to use that for now.

One further observation on that though. The notes in the tutorial seem to say it can be called from the bash command line: 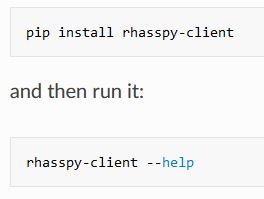 That doesn’t seem to be the case. I’ve only been able to call it from within a Python wrapper.

You might want to check the first line of the script to see if the path to the python file matches your system. I used the custom command script that us somewhere in the github for 2.4 and I had to adjust the path to call it from bash. Might be the cash here also

You might want to check the first line of the script to see if the path to the python file matches your system.

I’m not sure which script/line you mean here?

Ah, right, thanks. The rhasspy-cli script actually is a bash script, which runs a Docker session. It seems to successfully call python3, but that then complains about not having a module called rhasspy.

I assume that rhasspy-client, on the other hand, ought to be a Python script, but I’ve run find on the system and couldn’t locate anything at all with that name.