Here is the chaotic mess that is my redneck-robot, yes it’s a mess but it’s working.
Bot has 2 36 volt batteries, 2-4 buck-converters for step down voltage. 1 old-school wrt54G router from yesteryear (running customized DDWRT firmware) 4 motor controllers controlled by slave raspberry pi 3 (raspian buster) with 4 8-channel relays (GPIO, yes I found GPIO the most reliable for this so far, I tried other motor control methods), 4 350 watt motors from cheap hoverboards, and one master raspberry pi 4: hosting Rhasspy’s Docker container, a standalone Apache Lamp server (for when things are local), python 3, one (GPIO) 8 channel relay, 1 adafruit ultimate gps, 6 ultrasonic distance sensors, 1 raspi-cam with inferred, 2 temp sensors (for the LIPO batteries mostly), 1 real-time clock, 1 hologram IOT modem (used when things are not local-or script chooses cheaper internet if available), 1 simple analog stereo speaker, one usb sound card for the mic.
The Rhasspy stuff is using command mode for intents (sent to a local python3 script and often posting php scripts via the requests python library when it needs to do communicate with the web server based control system.). I’m using pico voice, and a customized snowboy for the wake-word. The bot is often using Rhasspy-api via curl commands to make smart a** comments.

Yes, building a nice wiring harness is on the to do list (meanwhile -complete chaos).
Anyway here is a pic of the robot dolly while some development was going on. 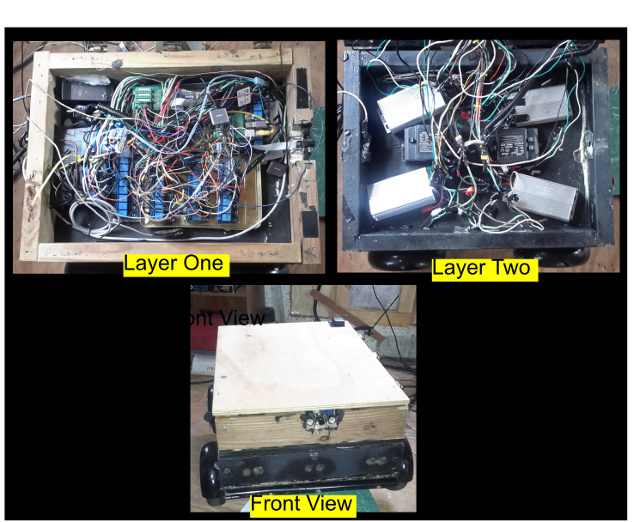 Nice, but what does it do

Eventually I have in mind several “attachments” for it that will do some of the doing parts, apart from being just an amusement. That list includes a lift attachment, robotic clamps/arms attachment, even a mower attachment, I did even dream up one for a bee-keeping helper (as I’ve thought about getting into some of that with a hive or two, because the bees are vanishing.). That’s all in the concept mode. Getting the thing working up to spec comes before all that, and this thing may just be a concept model/toy for some future redesign that actually will do things.

Checking back in here at Rhasspy. Updates on the silly toy Bot are underway again. I got tired of the Raspberry Pi OSes. I’ve installed the 64bit version of Ubuntu server arm versions on the 2 pis that control my bot. I know Ubuntu well, so that helps. I’ve updated the Rhasspy docker to the new stuff as well. I’m just getting started sorting out what is not working anymore because of the OS change and what things about the upgrade that I have to fish out. My stuff doesn’t use any Home Assistant stuff and was mostly just using Rhasspy for interfacing with some custom python programs that did everything. Regardless of what I build, I will not use ANY always on-outside sources that are listening in, and will firewall anything that needs a remote server that I don’t control, unless updating. The silly bot is an offline thing anyway. I still see some options with Rhasspy that still might suit me however, so I’m fishing through the upgrades.

Have you thought about using voice2json the little sister of Rhasspy as it could be a really good fit for a project like this. Although it doesn’t have snowboy support but that shouldn’t be a problem if your comfortable with python.

Thanks for the tip on Voice2Json, I did start playing with it. I hope to stick with Rhasspy for now, if I can get over a few issues that have crept in.