Cheapest RK3588 I have seen

Its the RK3588s which loses the pcie3.0 x4 but has the amazing cpu/gpu/npu of the RK3588 dunno about that onboard mic but hey 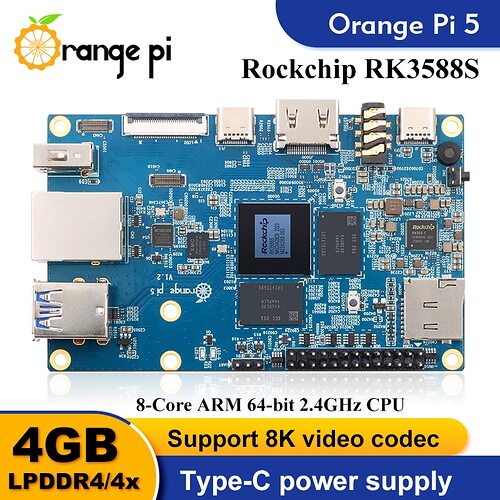 Taxes & Shipping will prob take it to just over $80 but its 3-4x faster (pi4) CPU with a GPU that can run ML and a 6tops NPU (Its actually 3x cores of 2tops) its actually great value.
I will give a later review as ordered a 4gb just to see what you can do with limited ram but suggest the 8gb if you can.

I got the 4gb version and suggest the 8gb as playing with open ai whisper the medium model just starts using zram swap and slows a bit. The large model hits file swap quite heavily and think the extra for the 8gb is worth it, but why I got the 4gb to test and at least I know.
I would prob never use a model so large as really they are Mac M1 territory.

Seems a great little board for $/perf but not done much more than a whisper benchmark Benchmark results · Issue #89 · ggerganov/whisper.cpp · GitHub

4x speed running the base model over a pi 4

I have started using Models - Hugging Face which is the leaderboard by downloads which is a reasonable metric to the latest and greatest.

Seems very much all Whisper & Wav2Vec

GitHub - oliverguhr/wav2vec2-live: A live speech recognition using Facebooks wav2vec 2.0 model. seems like a quick start but to be honest know little of wav2vec but the repo is streaming ready.
facebook/wav2vec2-large-960h-lv60-self · Hugging Face runs at about 2.5 load avg but generally seems less accurate than whisper.