I know it’s not related to rhasspy in any kind, but I think a lot of people around here have more experience with pis than me.

Has anyone any ideas on how to get rid of this annoying issue?

Hmm, perhaps there is a problem with the Ground-Connection (Gnd) between Mic, Raspi and Speakers?
In HiFi Equipment there are also sometimes problems when not all components are on the same ground-level.

I have the same issue and read a few days ago the audio jack was not good enough for good quality sound output. If that’s right we can not get rid of the buzzing while using the audio jack.

Therefore I am looking now desperately for a way to connect my raspberry Pi 4 via Bluetooth to a speaker. But I did not manage to get the sound output (from Rhasspy and Snips) to my bluetooth speaker yet.

On all my pis on board sound was never any good, there is always buzzing. I use a cheap usb soundcard and that works without buzzing. I think in the around 10 pis from 1 to 4 we did not have one that had good sound output.

I can’t say anything about the respeaker buzzing because I have the respeaker4 which doesn’t have sound output.

Same here.
I use either hifiberry cards for my some kodis (with RCA to amp)
Or respeaker for assistants

No one use the pi jack and all of them have onboard card disabled.
My assistants have creative metallix connected to the respeaker jack.

Thanks for the feedback. I’ll try to use a Bluetooth speaker and check whether the buzzing still exists. Otherwise I’ll maybe buy an external sound card.

Try bluez-alsa its in the raspbain repo.
For playing it should be quite good A2DP but struggled when using a Mic.

Maybe the Pi4 has further regulation problems but haven’t got a card to check.
Pi embedded 3.5mm is generally sucksville as well as the buzz you will get tracks or audio that distorts.
Not sure what it is input format or frequency but its a relative urgh! when you hear it and you will be checking your amp!

Anyone know if adding a bigger audio grade cap than the onboard 47uF across gnd and +5 helps?

The 5.1v 3.0 amp for the Pi4 or 5.1v 2.5 for the Pi3-0 are not as common as 5v so its a bit limiting in choice.
I have a Pi4 with official Raspberry 5.1v 3.0 amp and still waiting for delivery of some sounds cards but pretty certain much of a small buzz via a TPA3116 amp is the 3.5mm of the Pi and amp itself.
Being digital its the regulation and quality of DACs used and impedance matching of amp that can all get quite confusing.

Are you using a 5.1v or maybe its the slight undervolt that 5v generic can produce.

Are you using a 5.1v or maybe its the slight undervolt that 5v generic can produce.

I’m not sure what do you exactly mean. I’m just using the audio jack from my Respeaker USB Mic Array.

Was talking about power supplies and doubt you have skimped after a $70 usb mic.

Yeah in terms of pure audio it shlould sound the same as a 2 mic as they both use the same WM8960, stereo codec.

I am still waiting for delivery on my 2 Mic which is in a coronavirus delay somewhere.
I thought the output was a little more luxurious than just a plain old WM8960
They do state if there are no DC blocking caps you will get buzz.

When DC blocking capacitors are used, then their capacitance and the load resistance together
determine the lower cut-off frequency, fc. Increasing the capacitance lowers fc, improving the bass
response. Smaller capacitance values will diminish the bass response. Assuming a 32 load and C1,
C2 = 100F:
fc = 1 / 2 RLC1 = 1 / (2 x 32 x 100F) = 50 Hz
In the DC coupled configuration, the headphone “ground” is connected to the OUT3 pin, which must
be enabled by setting OUT3 = 1 and muted by setting L2MO=0 and R2MO=0. As the OUT3 pin
produces a DC voltage of AVDD/2 (=VREF), there is no DC offset between HP_L/HP_R and OUT3,
and therefore no DC blocking capacitors are required. This saves space and material cost in portable
applications.
It is recommended to connect the DC coupled headphone outputs only to headphones, and not to the
line input of another device. Although the built-in short circuit protection will prevent any damage to
the headphone outputs, such a connection may be noisy, and may not function properly if the other
device is grounded.

So dunno maybe the output is prone to noise as it says.
Haven’t got a Respeaker USB as prob could trace the tracks to see if they had DC blocking caps.
The input impedance of a line-in is going to be much greater heaphone impedance so you could use smaller caps.
Maybe dig out the input impednace of your amp so the relatively simple math and get 2 small capacitors to create a line-in filter.
I thought the audio out of the Respeaker usb would be a bit better than the cheap £10 2 mic, but looks like its the same.

Headphone outputs also drive higher voltages than line-in up 3V vs the .5-1.3v of line-in depending on amp.
So you may want to attenuate the output also.
So maybe your going to have to get a dual dual potentiometer and some caps and play and get it the best you can.
You should be able to get it much better with some reallycheap components but yeah looking like the headphone output isn’t that great for line in.

Thanks for your huge explanation. I’ve tried a different power cable with no success yet.

As soon as the radio stream is running I’ll evaluate how annoying the buzzing is. It’s not that load but somehow annoying

Yeah understand its like a hovering fly dunno why but they often annoy the hell out of you.
Reading the tech spec the WM8960 will give DC buzz into a line-in.
If you can get the impedence from the specs of your amp, 2 capacitors and a dual pot should help much.
Prob cheaper than say 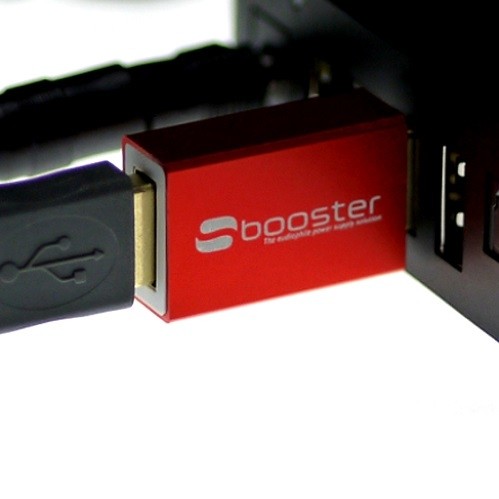 The Sbooster Vbus2 Isolator effortlessly upgrades your self-powered USB Digital to Analogue Converter. It is ideal for tweaking USB devices like the Upton Audio Regen and greatly improves the USB-chain when your DAC device or SPDIF converter has been...


Also dunno how good they are.

There used to be config file tweaks for the RPi3B+ and Raspbian Stretch:

I've been testing the Raspberry Pi 3B+ with Raspbian Stretch recently. I have a few older Raspberry Pi 3 devices around the house, but these are all

Don’t know if this is still relevant, but the information here may help you.

That is just the onboard 3.5mm of the Pi